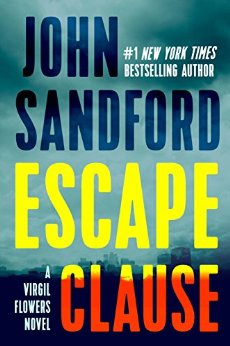 When I know a new book featuring “that effin Flowers” is on my list, I know there’s a real treat on the horizon.

Virgil Flowers, a detective working for the Minnesota Bureau of Criminal Apprehension, is a real piece of work and is regularly referred to as “that effin Flowers”.

In Escape Clause, Novel #9 in the Virgil Flowers series from John Sandford, two large, and very rare, Amur tigers have vanished from their cage, and authorities are worried sick that they’ve been stolen for their body parts by some very violent people. Couple this with the sister of Virgil’s girlfriend moving in, with one eye on Virgil and the other on exposing the underbelly of migrant worker activities, and storm clouds are everywhere.

John Sandford is probably best known for his Prey series There are now 27 books in that great series about Lucas Davenport. You can find the latest, Extreme Prey, if you scroll down this page.

As always, I’d suggest starting with Virgil Flowers Book #1, Dark of the Moon.

The Whistler by John Grisham
Hope Springs Eternal … but it’s not enough!
Monday’s Quote of the Week