The Resistance is relentless and we have reasons galore for not accomplishing our goals.

What is the common thread among all of the reasons we use to rationalize our misses? 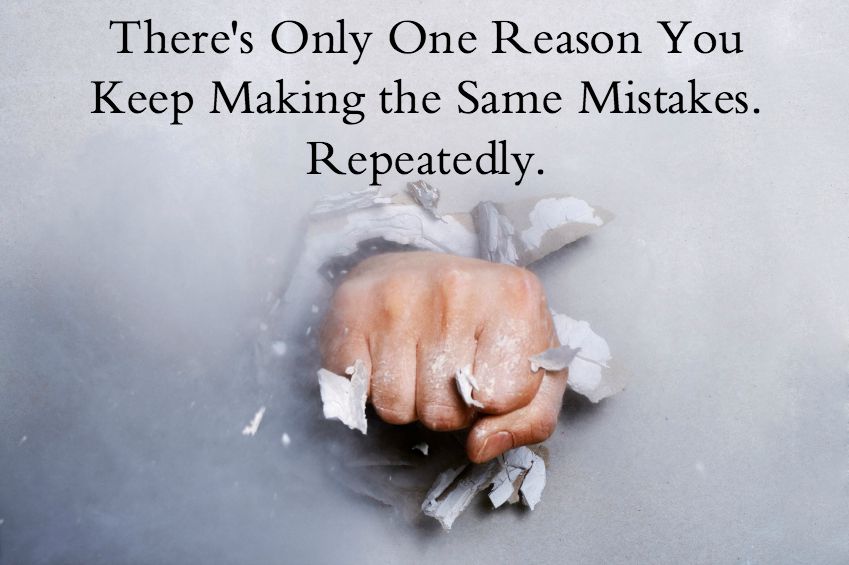 You can probably outline a long list of reasons these same issues keep popping up like whack-a-moles. Chief Executive has tackled this several times, including in their article, 5 Simple Mistakes Even Experienced CEOs Make.

If we haven’t become “dumb and dumberer,” what’s going on?

Why are we tackling the same problems over and over again?

What I discovered is that there is a constant swarm of resilient little creatures that appear like marbles on a bedroom floor.

We’re constantly dodging them, looking for ways to step around them, kicking them to the side … but rarely do we take time to permanently organize them so we don’t trip over them again tomorrow.

What are these forces that are at the heart of the Resistance?

Whether you prevail or fail depends more on what you do to yourself than on what the world does to you. ~Jim Collins

Most of us could list dozens of universal forces that have united to defeat our best-laid plans.

I’ve written about one of the biggest reasons these issues keep reappearing … our inability to make the tough decisions … but this reason and all the others are hiding behind the mask we too often overlook.

So, I’ve decided to rip off the mask and expose these reasons for what they are … and what did I find? The same face under every mask.

What can we learn from companies that become “Great by Choice”?

Great by Choice, the most recent book from Jim Collins, explores what differentiates the most successful companies … during chaotic and unpredictable times … from the also-rans. Those same features also apply to the leaders who are at the helm of those companies … and the cultures they build.

So, why do some companies fail to successfully respond to the obstacles thrown in their way … by a wayward economy, rising energy prices, oppressive regulation, predatory pricing, you name it … while others thrive despite the obstacles?

It’s because of the mindset of those leading these 10X companies.

Greatness is not a function of Circumstance. Greatness is largely a matter of Conscious Choice, and Discipline. ~ Jim Collins

The 10X companies Collins studied (companies which Collins defines as those that beat their industry index by at least 10 times), refused to be overcome by external forces. They recognized that unexpected roadblocks, even the black swans that Nassim Nicholas Taleb wrote about in his popular book of the same name, were simply grist for their mill.

The most successful companies modified their plans and followed them relentlessly, dodging bullets, sidestepping land mines, and confronting immovable objects as just one more tripwire to step over.

More than anything, for these companies, it is a mindset.

It’s a mindset for each of us, too!

Like the 10X companies, we need to embrace the notion that obstacles, of one kind or another, are a permanent part of the natural landscape. You can’t let these inevitable forces derail your plans.

You can’t blame these uncontrollable events for every shortcoming and can’t let uncontrollable environmental factors strangle the initiatives over which you have domain.

It’s human nature for us to want to look out the window rather than in the mirror to find the reason for our struggles and shortcomings.

Yes, the environment will throw spitballs at us all the time. We can’t ignore these forces … but we can create a plan to overcome them.

We can dodge some of them, turn others to our advantage … but we must turn them to our purposes because they aren’t going away … and we don’t want to go away either.

Fly to the light

The storm clouds are all around us … but, for every storm cloud, there’s a ray of sunshine.

It’s never easy to navigate when the headwinds are strong or the light is barely visible. Our success requires that we are both relentless and resourceful, with a positive attitude as our copilot and determination in the jump seat.

We must grasp that ray of sunshine like an elusive thread drawing us to the Golden Fleece.

Here’s the thing. It’s on you!

There’s a simple answer: Focus on what you can control.

Persevere. Revise your plan as needed.

Focus on what you can control and you will have grasped the only real thing you can count on.

Question: What is your “go-to” excuse for not getting things done? What have you done to overcome it?

Greatness is not a function of Circumstance. Greatness is largely a matter of Conscious Choice, Whether you prevail or fail depends more on what you do to yourself than on what the world does to you. ~Jim Collins

Rip Off that Mask. Let’s See Who’s Really Responsible for All of This?

Leadership Obstacles: There’s no one to blame … except yourself

The 6 Powerful Benefits of Admitting Your Mistakes

Monday Quote: What kind of movie are you making?
Are you going to fight the headwinds or let the Resistance claim another victory?
Fun Friday | 9 Super Annoying Habits I Hope You Don’t Have!