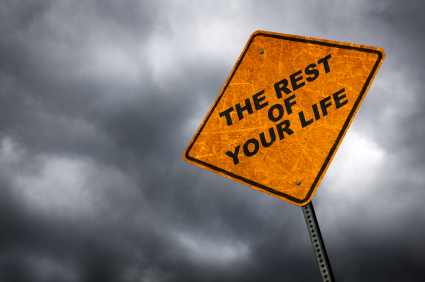 Fly to the Light!

Just after obtaining his pilot’s license, a dear friend from the Midwest found himself surrounded by unexpected thunderstorms. He clambered for every streak of sunshine he could find, ultimately zigzagging his way to a safe landing:

[quote]“That principle is a metaphor for my life. It seems that I have always flown to the light. If there was resistance or a combination of obstacles, I just vectored my way between them or around them. That approach is superior to flying blindly into clouds. You never know what’s in the cloud or on the other side of it. There could be another plane or there could be a bolt of lightening. You just never know. Flying in the light allows the pilot to see what’s coming and take evasive action. I commend that approach to you. When given the choice between taking a chance in the dark or flying in the light, choose the light. At least you have a chance if you can see what’s coming and have a chance to avoid it. Fly to the light, live in the light and avoid darkness, whenever possible.”[/quote]

[pullquote]“There is only one time that is important – NOW! It is the most important time because it is the only time we have any power over.” ~ Leo Tolstoy[/pullquote]

For every storm cloud, there’s a ray of sunshine. I remembered this message from my friend, who regularly writes to his family and friends, as I was diving deeply into our upcoming video series about the kind of metrics that will serve as our life-saving instruments. In the contrails of my previous column about the risks of flying blind, it seems like the perfect time to share his wisdom.

Since the circulation of his letter is both limited and private, no one would know how much I have plagiarized his words … but I have chosen to use quotation marks so that his voice is clearly heard because his spare prose more eloquently describes his philosophy of “flying to the light” than anything I could muster.

What if there is no light in the sky?

But what if there is no light at all? How do we navigate a dark sky when there is no visible alternative? Allow my friend to offer his observation:

“That’s not to say that living in the light is always possible. There are times when obstacles must be confronted. Generally, that will be necessary where there is no light to fly to. When that happens, you must stiffen your spine, take a deep breath and engage the obstruction. When there is no other option other than retreat or capitulation, charge. I don’t like to retreat. Retreat leaves me with a dissatisfied feeling about myself. I try to avoid that.”

Are you your own worst enemy?

I know that in the early days of my career, I was much more inclined to charge even when the path of sunshine was radiant for all to see.

Today, I recognize that it was more a function of arrogance and hubris than wisdom or insight. Sometimes I charged because I knew I could and bore little desire to leave much on the table for the other party.

At other times, I vainly sought any ray of light to avoid the inevitable disaster I saw coming. But, I wasn’t very practiced at it, and my hard-charging tendencies inspired the resistance that hastens rather than dispels the storm clouds.

Who’s your copilot? Is someone in the jump seat?

It’s never easy to navigate when the light is barely visible or accessible. Our success requires that we are both relentless and resourceful, with a positive attitude as our copilot and determination in the jump seat. We must grasp that ray of sunshine like an elusive thread drawing us to the Golden Fleece.

[pullquote]Every week, we’re sharing valuable and practical leadership tips and tools to help you BECOME a better leader. Why not get these valuable tips and techniques sent directly to your inbox every week so you don’t miss them?[/pullquote]

I wish I had my friend’s wisdom in those days … and today, for that matter. His is a simple but powerful philosophy that is well recommended to all of us. Just like pilots, we must either fly to the light or be dead certain that our instrument panel is an unfaltering guide.

Being dead wrong is just not an option.