What Does It Take to be a Great Leader?

Nothing in life travels in a neat formation accompanied by bugles and cavalry. A lot of it shows up filthy and unkempt, prominent in the mess we’ve made around our foxhole. These lessons are typically the offspring of hubris, naivete and ignorance … or from overlooking the land mines hidden beneath our feet.

“Being in the lead and winning is not the same thing.” ~ Rory McIlroy

What a dramatic Masters finish tells us about succeeding 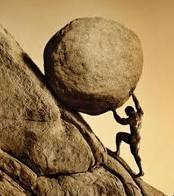 No, really, I had no intention of writing about the Masters golf tournament — again. You might want to start by looking at Madness or a Masters in Business … but, this 75th anniversary “tune-a-mint” that ended a few weeks ago offered more lessons than a kindergarten classroom.

What is True Grit? Do you think you have it?

Most of us think of Rooster Cogburn, either in the persona of John Wayne or Jeff Bridges, when True Grit is mentioned.

But, what is true grit? Never say die? It’s never too late? All those, and more, applied to the crushing legion wrangling for the green jacket on that fateful Sunday. Eight players shared the lead over a few hours on Sunday. As in life, the contrasts were remarkable.

Rory McIlroy, who held the lead over 63 holes of the tournament, entered Sunday with a four stroke lead and watched it quickly evaporate as his game imploded — he shot 80 on the final day — as contenders climbed over him from every side. Eight players as far behind as seven strokes down tied for the lead at some point on that bucolic Sunday afternoon.

Life is perplexing blend of success and failure

Some rose to great acclaim — Charl Schwartzel didn’t take the lead until the 16th hole on Sunday. He won with a birdie on each of last four holes — never been done before by a Masters winner — and on his first ever visit to Augusta.

What does it take to succeed under pressure?

What happened? What does it take to persevere under pressure … in the face of intense and relentless competition … when it’s so much easier to fold your tent and call it a day? What exactly is in the DNA of true grit, anyway?

Of course, you’ve got to have talent, you’ll say, that’s a given. True grit isn’t worth much unless you have the capability to succeed, so it’s important to have a clear understanding of your talent and that you apply it where it gives you a competitive advantage. If you’re a fabulous chess player who’s a duffer on the golf course, no amount of perseverance will overcome the futility of joining the PGA tour.

Our talents, no matter how rich, are fleeting … sometimes rising to the surface when we’re booming big drives, other times hidden beneath the surface when we can’t make a putt to save our lives. Time is the father of patience and its greatest adversary is our desperation to get something done quickly. Maybe we waited too long, underestimated what was required or made too many mistakes. True grit will lead to success if we have the patience to allow our talents to ultimately prevail.

Purpose is essential to direct our energies and supplement the fuel stores supplied by confidence. Without Purpose, we would persist but not prevail, drudging along with no meaningful intent.

That’s the next ingredient in this gritty stew, a belief in yourself and your talent.  We’re all pretty good at second-guessing our failures: “What could I have done differently?” “Why did I do something so stupid?” “When am I going to learn?” But, that kind of retrospective is like spitting in the soup. Confidence in yourself is the oxygen that fuels true grit.

Pluck is the ability to remain fearless in the face of adversity. You reject the pain, ignore the fear and fight back the tears on the way to victory.

By any other measure, this is strength of character. There’s not a bright line separating this quality from true grit itself, but perseverance may be true grit in a different costume. Let’s call it three parts confidence, two parts pluck, sprinkled with a dash of patience.

Endurance may be the fraternal twin of patience, but not everyone with patience will endure the obstacles that are strewn in their path. That fortitude keeps us in the game, willing to suffer the pitfalls and obstacles that would deter weaker souls. Patience would be a lonely soul without riding horseback on endurance, and we would only be durable losers much of the time.

True Grit is a magical elixir

True Grit. It’s a magical elixir. Without it, our successes will only be occasional. With it, we can conquer all that’s before us.

We probably can’t get enough of it, can we?

Do you think you have True Grit? Great … but It’s Not Enough.

Leadership Lessons: Madness or a Masters in Business?

Leadership Lessons: Wild & Crazy Guys or Masters of our Domain?