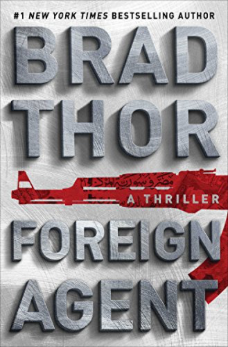 Ok, so I cheated again. I previously told you I was going to power through Stephen King’s Bill Hodges Trilogy. I did finish Mr. Mercedes and had #2, Finders Keepers in my sights, but I decided to turn to the Jack McClure/Alli Carson series from Eric Van Lustbader, who I really like. But I just couldn’t get into Last Snow, #2 in the series. Too much inner speak, something ….

It may have also been because I knew there was a slew of great thrillers coming up, featuring some of my favorite characters, and I was chomping at the bit to get there.

So …. while I’ve been at poolside, I finished Brad Thor’s Foreign Agent, #15 in the great series featuring Scot Harvath, a former Navy SEAL and Secret Service agent. He’s now a black ops specialist serving the President, engaged to tackle issues where complete deniability is the rule of the day.

In Foreign Agent, Harvath tracks down a legendary Russian terrorist … only to discover an even more diabolical player determined to bring the terrorist war to the steps of the White House. Across European capitals like Vienna, Brussels and Berlin and throughout the Middle East, Harvath confronts the devil himself. A great series … and if you’re just discovering it, a great binge-read opportunity.

Use of Force by Brad Thor

Ghosts of War by Brad Taylor

Ring of Fire by Brad Taylor

The House of Secrets by Brad Meltzer
Have you ever heard of the Zeigarnik Effect? You Experience It Every Day.
Make Sure You are Leading by Asking the Right Questions.