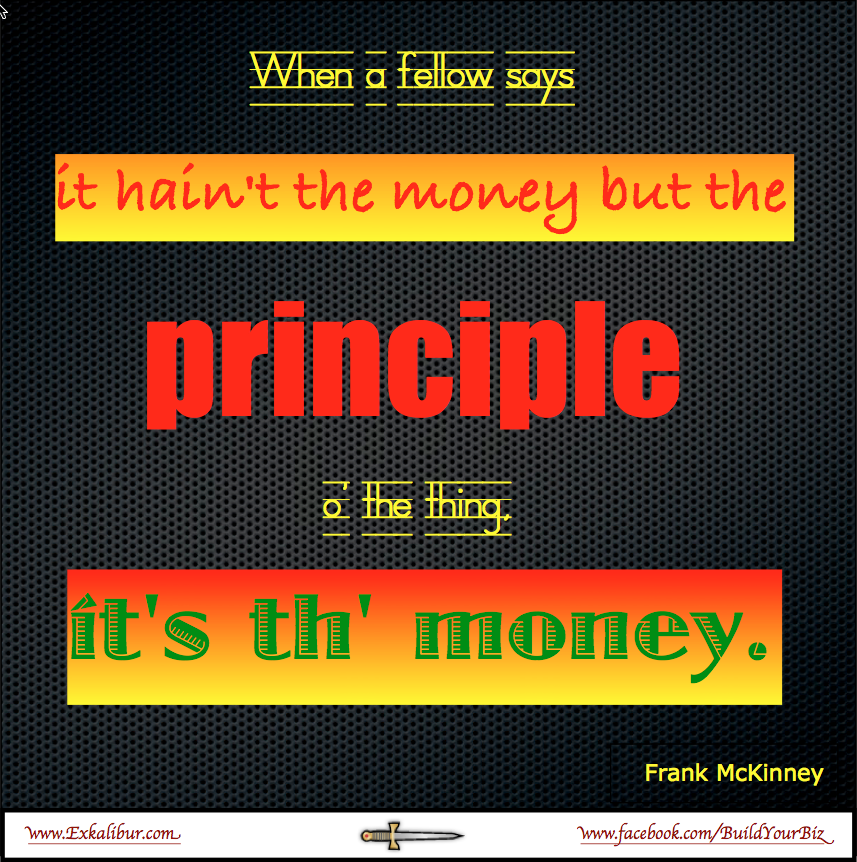 Magicians are pretty amazing, aren’t they?

They do stuff right in front of our eyes

and even then we have no idea how they just did what they did.

Somehow, he gets you to look one way while he’s doing something else right in front of you … and you completely miss it.

Watch Apollo Robbins, the best pickpocket it in the world, and you’ll see exactly what I mean.

Financial Legerdemain: A Magician’s Trick by any other name

I’ve always loved the term, “legerdemain”. The shorthand definition is “sleight of hand”, kind of “now you see it, now you don’t”. Like Apollo.

But when it’s applied to financial metrics, with an unstated intention of distracting you from focusing on the right thing, it’s a particularly destructive force.

It’s the worst if you turn it on yourself … and end up deceiving yourself about what performance metrics really count.

Earnings Without the Bad Stuff: “Share of Mind” as a metric?

[pullquote]Remember … you won’t BECOME a better leader until you start BEING a better leader. Start by making sure you know why building consensus does not build success and why collaboration won’t overcome poor communication … and don’t forget that it’s impossible to fake authenticity.[/pullquote]

Gretchen Morganstern has a keen eye for what she calls “earnings without the bad stuff”, and expresses her skepticism in another of her NY Times columns.

Her favorite company in this regard is Homewood, a web-based provider of real estate services which once lauded its potential because of the “share of mind” it enjoyed among its customers.

The stock reached $489 in early 2000; a few weeks ago, it closed at $16.09. (Gretchen notes that Stuart Wolff, a former C.E.O., was sentenced to prison in 2010 after pleading guilty to conspiracy to commit securities fraud.)

How about that term? For my part, I wrote an earlier article about “ACSOI”, a financial measurement lovingly embraced by Groupon and a few others.

Pronounced as either “ack-soy” or “ask-saw”, it stands for “adjusted consolidated segment operating income.” A big mouthful that tastes about like it sounds.

When you read the article, you’ll see how ASCOI is another deliberate construction designed to obscure expenses that are real costs … another invention to distract you from what’s really going on using proven conventional metrics.

Now, we get to Twitter, Morganstern’s target this time around … and there’s plenty of evidence to support our shared concerns.

Twitter went public at $26, which is a valuation equal to 33 X last 12 months revenue and 22 X 2014 forecasted revenue … which is the most expensive IPO EVER relative to revenue. Market cap at the end of Day 1 was about $28 Billion, although it has since fallen to “only” about $20 Billion, more than 50% above the IPO price after less than a week.

When you run across a word or phrase that is underlined with a dotted red line, it is a defined financial term. If you hover over it with your cursor, the definition will appear alongside. A complete Glossary is also available.

Just look “through the eyes of management”

Morganstern’s article offers the details … but when a company invites you to consider a yardstick that is unconventional … and backs out real costs that cost real money … you can pretty well assume they want you to ignore those costs because the results are much better without them.

For their sake, and the sake of their investors, let’s hope these ridiculous promotional concepts are kicked to the curb, and Twitter executives are actually paying attention to conventional and accepted performance metrics.

EBITDA is possessed by the same devil

While we’re on the subject … EBITDA is another potent weapon in the battle to get to those “earnings without the bad stuff”. It won’t take much research to find an extensive library of articles and analyses seeking to detox the EBITDA fallacy.

Warren Buffett never has anything good to say about EBITDA, either. Here’s just one of the things he has said taken from the 2000 Berkshire Hathaway Annual Report:

Trumpeting EBITDA (earnings before interest, taxes, depreciation and amortization) is a particularly pernicious practice. Doing so implies that depreciation is not truly an expense, given that it is a “non-cash” charge. That’s nonsense. (Buffett has more to say about this if you wish to read the Chairman’s Letter. His letters are legendary and very insightful on a wide range of topics. The 2002 report can be found here.

You can also read my article, Does EBITDA Bury Its Own Dead?. There, you’ll find a powerful and simple graphic example of why EBITDA is hardly a placeholder for cash flow. Not even close.

This is what happens when you’re selling something

You might note that these efforts at misdirection arrive on a white horse when the perpetrator wants you to do something different than you might otherwise be inclined to do … if you were paying attention, that is.

In the stock market, this invariably occurs when someone wants you to buy a stock at a value that defies proven financial metrics and accepted methods of valuation.

Apollo Robbins wants to pick your pocket by getting you to focus on something else so you won’t even know your wallet’s missing. Many of these concepts of financial legerdemain are likewise distracting from what’s really happening in the company.

Don’t fall into your own trap

I’m pretty sure that the performance of all of our companies would be much better if we left out certain costs.

Inflating expectations and touting any number that makes you look good while ignoring those that don’t, is a tempting seductress … but most temptresses serve a bewitching brew that is tasty going down but has a bitter aftertaste on the return.

So, don’t go on a fool’s errand. The more you try to deceive others, the more you fool yourself … and pretty soon, you’ll start making decisions that will hurt your business instead of helping it.

Be brutally honest about your own numbers. Ask your accountant or financial advisor if you need help.

Whatever you do, don’t drink you own Koolaid … it’s a good way to lose your cookies!

Are you being brutally honest about your own numbers or are you telling yourself things are better than they really are? Who’s going to win that battle?

Putting lipstick on a pig!