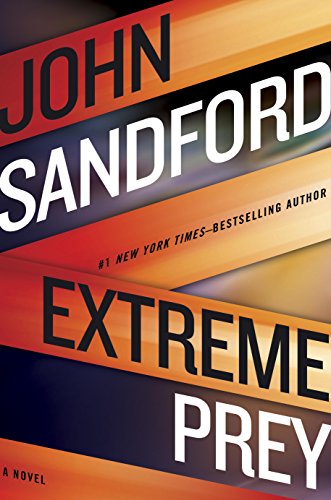 There aren’t many series characters that have been around for 25+ books, but Lucas Davenport is still kickin’ ass and takin’ names in Extreme Prey … and I’ve read one each year since 1990.

John Sandford, the pseudonym for Pulitzer Prize winning John Roswell Camp, has now written #26 in the Davenport series, all of which contain the word Prey in the title, thus the term, the Prey Series.

Lucas started out as a Minneapolis cop in 1990 and over time, worked as a Special Investigator for Minnesota’s Bureau of Criminal Apprehension, then the Governor and now for a Presidential candidate who he learns has a few people who would like to violently disrupt her campaign.

Lucas is rich, a software pioneer in his early years, always drove a Porsche (until now?) and dresses right out of GQ. But, you don’t want to mess with him and he always get his man or woman … almost.

As always, if you want many hours of escapist reading and watch the evolution of Lucas Davenport in the Prey Series, start with Book #1, Rules of Prey, in this great series.

Friendly Fire by John Gilstrap
Why Thinking Strategically is Critical to Your Success. 4 Swing Thoughts to Get You There.
When in doubt, do something.