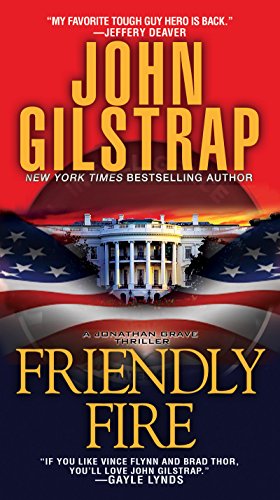 It’s been a great summer with some of the biggest ass-kickers around filling the shelves … and none tougher than Jonathan Grave, the leading man in Friendly Fire, the 7th book in John Gilstrap’s series.

I like Grave because he’s not an assassin or undercover operative per se … but a hostage rescue specialist known as Scorpion. His missions invariably start with someone to be rescued under the most difficult of circumstances and Scorpion pulls out the stops and takes no prisoners.

This time out, it’s even more complicated because Grave is trying to uncover the identify of a man who escaped a hostage rescue mission that saved the life of Ethan Falk, 11 years old then and now, 11 years later, a coffee barista. We care because Falk recognized that man from 11 ago when he came into the coffee shop. He’s is now accused of murder, but there is no existing record of his abduction or his rescue that might exonerate him.

Gilstrap only gets better each time out, and it’s a great series. As always, i recommend you start at the beginning of the series, No Mercy.

Ring of Fire by Brad Taylor

Redemption Road by John Hart
More Timeless Leadership Lessons | Why are some challenges so hard to kill?
Why there is no “I” in TEAM.