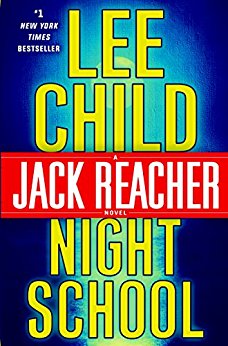 Night School by Lee Child is Number #21 in the Jack Reacher series.

I spent some time with Lee Child several years ago. A very nice man who was formerly a TV script writer … who writes about a not so gentle giant by the name of Jack Reacher. The “Reacher” name came to Child when his wife asked him to “reach up” to the top shelf when they were grocery shopping in the late 1990s.

Since then, Reacher has become an iconic loner. He owns nothing although in the later books, he finally gets a cell phone and credit card, but that’s it. No home, no car, no clothes except those on his back. When he needs new ones, he goes shopping at a discount store, wears what he buys out of the store and throws the rest away.

He’s a classic badass and loads of fun ever since I read The Killing Floor, the first book released in 1997 before anyone I knew ever heard of Lee Child. Since then, he’s sold more than 70 million books in the Jack Reacher series, the only books he writes.

To be fair, this book is not my favorite. In this prequel, Reacher is 35 years old and still in the Army. He’s won a medal only to discover he’s being sent back to “school” in what one might call a “cooperative” competition between branches to catch a thief and spy. Reacher is a loner, and this is really the first time he’s been part of an ensemble cast. As a result, some of the characteristics he’s known for get submerged in a broad cast of principals.

Nonetheless, he’s quite the stud and you’ll love getting to know him starting with The Killing Floor.

Night Owl or Early Bird?
When the ‘Smartest Guys in the Room’ Can Kill You | 4 Warning Signs You Can’t Ignore
Who’s Interested in Paying More Taxes? Any Volunteers? | Trump’s Tax Returns