If you’re hankering for something to read … maybe to carry you into summer and beyond … you’ll want to include me in your will for recommending this book and the entire Penn Cage series. Here’s my address …. 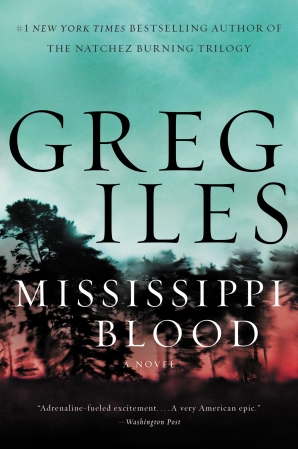 Finally, the 6th novel in the Penn Cage series, Mississippi Blood, and the final book in the Natchez Trilogy (which comprises Book #s 4-6) arrived and it is absolutely fabulous,

Last summer, I described the terrific series from Greg Iles starring Penn Cage, a lawyer turned novelist turned Mayor, who has to deal with a murder charge leveled against his father, a beloved local doctor for over 40 years, who is accused of killing the African American nurse with whom he worked in the 1960s.

But his father invokes doctor-patient privilege and refuses to speak in his own defense. The quest for the truth unravels sexually-charged secrets, vestiges of the KKK and some of the most powerful men in Mississippi.

At around 700pp, it’s shorter than its two predecessors, but brings the Natchez Trilogy to over 2,300pp. But it’s worth every moment you’ll spend.

Like all of the Penn Cage books, it’s a captivating story, rich with Southern traditions and chock-full with menace, suspense and close calls. The Natchez Burning Trilogy is being turned into an Amazon TV series starring Toby McGuire.

This is one of the best series I’ve read in a long time, remarkably different than the equally long Clifton Chronicles which is terrific for so many different reasons.

As I’ve said, when I discover a new series, I follow my own recommendation to start from the beginning. So, start with first book in this series, The Quiet Game.