This Was A Man by Jeffrey Archer 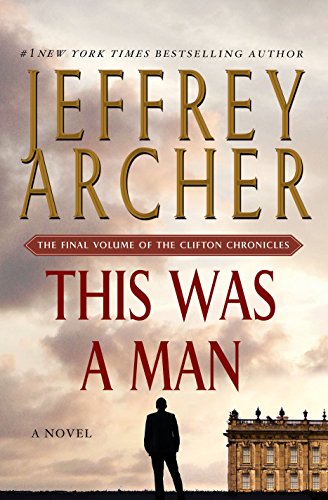 Finally we arrive at the conclusion of The Clifton Chronicles, the 7 book series started by world-class storyteller, Jeffrey Archer. Last week, Cometh the Hour was released as the final book in the epic journey spanning 100 years of the life of Henry Clifton and family.

It was fascinating to learn that the series began when Archer turned 70. Don’t miss his interesting explanation of what prompted him to start an entirely new series.

While I already own all 7 books, I stopped reading at #2 ONLY because I couldn’t remember enough about #1 to follow the continuity required of a series like this. Go figure.

So, now the journey begins. I intend to re-read Book #1, Only Time Will Tell (which I’ve only done once before for any book), and then read the entire series through to the end. Not sure when I’ll start since there are quite a few good ones ahead, but I’ll keep you posted.

If you haven’t read any books by Jeffrey Archer, you’re in for a treat. His first book, Not a Penny More, Not a Penny Less was published in 1975. Like his countryman, Ken Follett, he is a fabulous story teller.

Only Time Will Tell by Jeffrey Archer

The Sins of the Father by Jeffrey Archer

Mightier Than The Sword by Jeffrey Archer