What Does This Mean to Us as Leaders: Leave No Man or Woman Behind?

Among many things, the Special Forces are famous for this credo: Leave No One Behind.

H ow does that apply to your leadership? 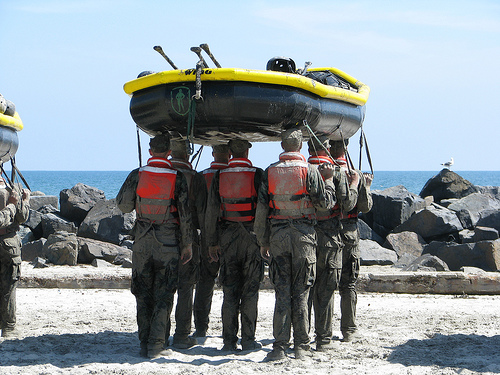 Leave No Man (or Woman) Behind

The Navy SEALS are famous for many things, but one of their credos we often hear about is Leave No Man Behind. (We’ll give them a pass on the single sex reference since women were not allowed in military combat roles until January, 2016.)

This concept is often attributed to the elite U.S. Army Rangers, who have this language as part of their creed:

“I will never leave a fallen comrade to fall into the hands of the enemy.”

The Latin version, nemo resideo, is even the motto of the Marine Corps’ Personnel Retrieval and Processing Company, the team charged with retrieving the remains of fallen service members from the battlefield.

For them that means, at all costs, do not leave a fallen comrade on the field. Bring him or her home even at great risk to yourself.

Footnote: After 18 months, the first woman enlisted to become a Navy SEAL this past summer. So, it’s time to change the mantra to “Leave No Man or Woman Behind.” I would love to tell her story, but her identity and training progress are, so far, confidential to protect the candidate’s personal security and “career viability as a future special operator”.

What does this mean for you as a Leader?

It should be a powerful reminder that it is your responsibility to bring your people along with you.

Jack Welch is credited with this quote which sums it up quite well:

You need to act. Leaders don’t leave their people behind … dead or alive.

What Do I Need to Do?

Your team is only as strong as its weakest link.

If you can identify those links and devote quality time to make those links stronger, your team will be stronger and you’ll Become More Effective and get more done.

Keep both eyes on a swivel.

One of them should be looking ahead, assessing the landscape and constantly seeking the path of least resistance to move your team forward.

The other eye should be looking over your shoulder.

Is anyone following you?

How can you help them keep up and optimize their contribution to the team?

People will follow you through the gates of Hell if they’re certain you won’t leave them behind!

Question: WHAT SPECIFIC ACTION will you take to make sure you leave no one behind?

Hop on over to our Facebook Page to leave your comment or question. I visit it every day and look forward to hearing from you and expanding our discussion of these ideas and concepts.