Man’s shortcomings have been catalogued since the Garden of Eden, and ever after, philosophers and kings have attempted a definitive list of those iniquities. 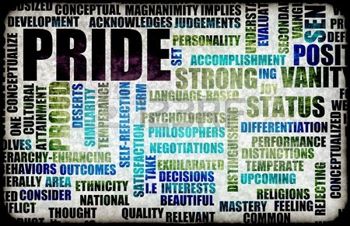 Pride is the Mother of all Sins

Pope Gregory in the 6th century reduced the list of wicked human passions to seven, which we generally know as the 7 Deadly Sins.

You’ve seen it often accompanied by various artist renderings illustrating the specific punishments that might accrue to the hapless offender.

Monsieur Webster defines pride as a …

lofty and often arrogant assumption of superiority in some respect.

Interestingly, Pope Gregory consolidated the word with its kissing cousin, vainglory that implies …

an inordinate and therefore empty or unjustified pride.

It’s no surprise, then, that the punishment associated with pride is being broken on the wheel.

I’ll spare you the dreadful details, but it was a sign of great dishonor reserved during the Middle Ages for only the most grievous crimes.

What’s the Opposite of Pride?

Humility is usually seen as the opposite of pride.

It’s a modest opinion of our own importance, and a more powerful sentiment from which to consider both our accomplishments as well as what is yet to be done.

Fans of Jim Collin’s Good to Great will recognize Humility as a hallmark descriptor of the successful but unheralded leaders he discusses in his landmark book. Pride is not on the list.

It’s not always easy to describe, but I think all of us know the difference when we see it.

Idleness and pride tax with a heavier hand than kings and governments. ~Benjamin Franklin

Is there a bright line between Pride … and Proud?

You can see from the image I’ve used that there are many other words and concepts associated with the word Pride.

It’s not easy to find a bright line between being proud of our accomplishments, a seemingly natural and uplifting feeling, and the pride that philosophers believe leads the pack of human frailties.

Yet, when we read that pride goes before destruction, according to Proverbs, or hear the more common phrase – pride goeth before the fall – we understand its meaning.

It’s natural to be proud of our company, our people and our culture.

If pride is a lofty assumption of superiority, it can mislead us into being arrogant and complacent competitors rather than companies eager to serve our customers.

Before I wrangled with this article, I hadn’t thought much about the difference between the words “proud” and “pride,” but when I hear them, the difference is easily discernible just as it is to our customers.

I bet you can hear the difference, too.

The Exkalibur Leadership Forum is a peer group of CEOs and senior leaders who collaborate to Become More Effective Leaders. If you’re interested in learning more, simply click on this link for the Exkalibur Leadership Forum. You’ll see a summary of the program and an opportunity to request additional details. A brief series of emails will describe the Forum in greater detail and outline what we do, how we do it, what subjects we cover and, most importantly, what’s in it for you.

Are Pride & Vanity each something different?

Jane Austen wrote that vanity and pride are different things, though the words are often used synonymously.

A person may be proud without being vain.

Pride relates more to our opinion of ourselves;

Vanity, to what we would have others think of us.

In business, being proud can be a valuable tool to build camaraderie and teamwork.

But, it can also be a beguiling temptress that seduces us into a feeling of superiority that blinds us to our shortcomings and how our customers and other constituents may perceive us.

Envy is an apostle of Pride

Envy follows close behind Pride on the list of the Seven Deadly Sins.

We know it as a covetousness of another person’s advantage, success or belongings.

It’s a desire to have what someone else has earned. In business, it’s a dangerous distraction to look across the aisle at the bounty of others.

In most households, including my own, it’s often associated with the phrase “that’s not fair,” a time-honored observation when someone else has something we don’t.

Envy only gets in the way of our objectives

We probably wouldn’t be human if we didn’t, at least once …

That, alone, is not such a big deal. But, we also know from our earliest days, followed by periodic and painful reminders of this lesson, that envying the achievements or successes of others does nothing to advance our own cause.

Be humble and proud, not envious or prideful.

It’s a waste of time to bemoan the achievements of our competitors.

To envy them because they have achieved goals we have missed works against us, leading us to take our eye off the ball.

Our focus should be on what we can accomplish and what we need to do to be successful.

Get over it … move on … and deal with the things you CAN control.

Stay focused on what you can accomplish!

Stay focused on your goals and resist looking through the wrong end of the telescope to see what others have done.

Don’t be angry about this article, either.

Anger’s next on the list of Seven Deadly Sins … and its punishment is gruesome, indeed.

Question: Does your organization Stand Proudly and with Humility or is Pride getting in the way of your progress? Share your thoughts by visiting our Facebook Page or @Exkalibur on Twitter. Let’s figure this out together.

The Sins of the Father by Jeffrey Archer

Does anyone know WHY you’re in business? Wanna tell ’em?
The Power of Checklists | One Simple Tool to Overcome Brain Freeze
When you have a bold idea, do you take bold steps?