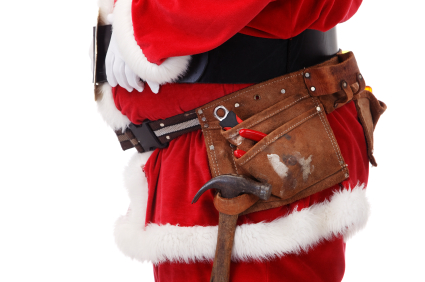 Yes, the holidays are here and already the list of things to do continues to grow – completing the annual budget, planning parties, visiting with friends, figuring out what to get who for when … and so it goes.

Yet, my spirit remains strong, so I’ve prepared a menu of 12 holiday treats that I hope will slide down like Amaretto eggnog in front of a winter fire.

I’ve even scoured some of my earlier columns to find the most delectable morsels.

[pullquote]“In theory there is no difference between theory and practice. In practice there is.” — Yogi Berra[/pullquote]

So, here’s a smorgasbord of lessons learned – a few appetizers, a choice of entrees, a little dessert – from executives of both extraordinary capability and numbing incompetence  — that should grace your executive table for 2015.

Be clear about it and thrive.

2.     If you don’t think you’ll ever have a management succession problem, you already have one.

Start now so when that day arrives, you’re prepared.

You can count on that!

3.     Build your compensation plan based on performance. Period.

Skip all of the egalitarian schemes and make sure you’ve set clear expectations so that the rewards actually promote your objectives and differentiate your top performers.

Don’t allow the naysayers to take you off your game.

Press forward, be aggressive and instill a positive attitude throughout your organization.

“If all economists were laid end to end they would not reach a conclusion.”

So, focus on what you can control.

Change what you can.

Leave the rest to someone else.

How can you defend your value proposition and find a way to nudge prices upward and increase value?

The discounting path is a descending staircase … and we all know it’s much harder to climb the stairs than to go down.

6.     There’s no such thing as over-communicating.

Talking too much, yes.

But reminding your colleagues, customers, employees and vendors what you stand for, where you’re headed, how you’re going to get there?

You can’t say it often enough.

Growth is a magic elixir in many ways.

It stimulates stronger relationships, greater buying power, opportunities for people development … and the list goes on.

It’s also a death trap if it’s not managed.

The unexpected lack of cash surprises many companies on a growth path more than those struggling to survive.

The first group doesn’t know there is one.

8.     Banks and accountants are valuable allies.

Don’t go into battle without them.

If the relationship’s not working, check the mirror.

The solution is probably smiling back at you.

9.     Never overlook the critical discussion about the “business” of the family.

While this is an appropriate time to remember the “family” part of the “family business, the “business” of the family is too often neglected.

You can nurture your family. All the time. Forever.

But, if there is no business, there will be no family business.

It takes some tough decisions sometimes, but it’s the key to the legacy you’re trying to build.

Don’t forget about the engine that drives the family business. The business.

10.  “Incentives are the cornerstone of life” …

Figure out if they’re working and if not, fix them.

If you don’t have any, get some.

They work. Believe it.

Most experienced executives know the right answer, they just don’t like it.

As a result, they get wrapped around the axle and trapped in inaction justifying all the reasons they can’t decide.

Make the right decision. Now. It will work out.

He always seems to be on a beautiful tropical island, sipping margaritas, guitar in hand, sun baking the sand.

An occasional company picnic or an after-hours pub-crawl isn’t enough.

Neither is a ropes course or a team-building cook-off.

They’re the ruffles and flourishes.

The heart of a company is its values; its brain is a leadership team that’s serious about its mission but doesn’t take itself too seriously.

Make sure you take some time to have fun. Just for the fun of it.

Question: What are you doing to make 2015 your Best Year Ever. (Please take a moment to leave you comments below.)